What is digital forensics? 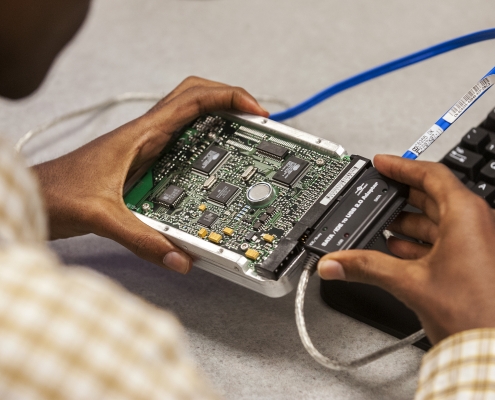 Have you ever watched the well-known American TV show CSI: Crime Scene Investigation, being fascinated as the team of investigators followed up on fingerprints, hairs, drops of blood, or any other indications that someone was here? In the same way as people leave physical pieces of evidence of where they’ve been, they leave virtual traces online, too. File fragments, activity logs, and metadata, among others, may be indications that someone is not where they are supposed to be.

What is digital forensics?
The process of examining, interpreting, or reconstructing digital evidence on computers, networks, or the web is referred to as digital forensics. It’s more than just finding evidence, however – a digital forensic specialist also has to be aware of the law to ensure that what they find is accepted by a court, no matter what kind of investigation is ongoing.

The evidence gathered from digital forensics can be helpful in authenticating the source of a document or some software, or even to catch a criminal committing cybercrime. This is why digital forensic specialists may be used in law enforcement, open investigations, and even in cybersecurity.

Mobile Phone Forensics
Mobile devices and appliances connected to the Internet of Things are becoming increasingly common, so it shouldn’t really be remarkable that an entire section of digital forensics is dedicated to these devices.

Also known as cell phone forensics, this digital forensics division may recover deleted data from mobile devices, analyze any recovered data, extract customer data, and even get rid of any malware that may be on your devices.

If you take a look at that last point again, you’ll realize that the ability of these specialists to remove malware from your phone can definitely be used in a negative manner. If a hacker or someone who means harm has that capability, the very technique meant for good can be used to obtain personal data that can then be leveraged against you.

Forensic Digital Evidence
When you are using a computer, you are leaving traces, also known as “digital fingerprints”. It may be your web browser history, cookies, file fragments, headers, metadata, timestamps, and even backup files. In either cases of cybersecurity and digital forensic investigations, experts can take this information and make sense of it, noting an incident, proving a perpetrator, or developing a strategy to fix the shortcoming.

The data gathered from the activity and methods used by hackers and cybercriminals can be extremely valuable in preventing future violations, understanding the techniques of cybercriminals, or finding new types of malware. Intelligence databases and digital security companies alike can make use of this information to improve their current practices.

For enterprise owners, however, the information is used to respond to that particular attack and figure out how to prevent future similar violations. Specialists can find data on attack vectors, new or evolved from of malware, and even Advanced Persistent Threats, which are cyber attacks that go on for months or even years, subtly gaining access to your system.

When you open a program or a document, you leave a trace, even if you do not save it. When a system is procured that is suspected to be related to a case, it’s usually required that no one touch or make changes to the system until a digital forensics investigator gets a chance to obtain any evidence that can be found on the system. This is particularly true in cases where you have to establish that there were particular files were accessed, the methods used to access them, and the timeline of events.

In the process of collecting digital evidence, an investigator usually starts by getting a precise clone of the system at the time it was copied. Oftentimes, a device called a write-blocker is used, which allows copies to be made of a system that is shut down.

There are cases where investigators are unable to shut down a system for fear that some evidence may disappear. In such a situation, specialists would use a “live acquisition” technique that runs a diagnostic program on the system in question, copying information into the specialist’s drive.

Investigators have to be sure that they have due cause to obtain data from a system, otherwise evidence obtained throughout the investigation could be deemed inadmissible.