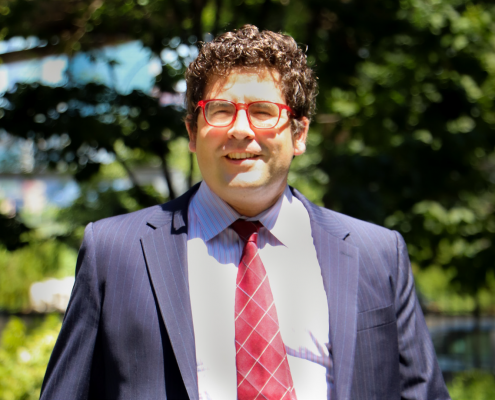 Daniel B. Garrie is consistently described by attorneys familiar with his work as a preeminent expert in several specialties at the intersection of technology and the law. A mediator, arbitrator and court-appointed subject matter expert, Garrie has spent the better part of his life literally writing the book on everything from cyber security to e-discovery. In addition to his neutral work for JAMS, he owns and operates a technical forensic company called Law & Forensics and is the author of six books, including, “Plugged In: Guidebook to Software and the Law.”

Garrie said he is one of the few people designated as a “technical special master” appointed by federal and state courts, including the U.S. District Court in San Diego, to handle technical complexities of cases a discovery arbitrator might not understand. “I’ll get appointed to do the forensic technical work,” Garrie said, noting he is normally called in on technically dense issues such as cloud computing disputes. “Say you agree to port 150 major business critical applications for a global company, you’re talking eight figures and a fee. Then you’re going through it and you determine that company misrepresented their ability to do it and their skill set and they’re using subcontractors,” Garrie said, giving an example of a typical case he might be called to consult on. In addition, Garrie said his experience expanding and selling several technology companies allowed him to confidently “resolve or mediate disputes between their investors or between the board members and the startup,” referring to services he provides to technology companies.

Michael A. Sherman, a partner with Stubbs Alderton & Markiles LLP, said he was introduced to Garrie by a Los Angeles County Superior Court judge in 2008 when that judge appointed him as a “special master subject matter expert” in a case dealing with spoliation of digital information. “The judge appointed Daniel Garrie to get to the bottom of the claims of spoliation of evidence, and that is exactly what he did,” Sherman said. Sherman was litigating a case on complications surrounding the sale of Skype to Microsoft Corp. “There was a major dispute concerning entitlement to some profits realized on that sale,” Sherman said, noting there were between 12 and 15 evidentiary hearings in some 18 months in which Garrie made involved requests for information from both sides. “He proved himself in this case to be both brilliant on issues pertaining to how business is conducted in the digital world and tenacious in wanting to get to the bottom of things,” Sherman said. “He knows this stuff better than anyone I’ve ever met.” Sherman gave the example of a claim made by a witness in the case that she had lost troves of digital evidence because her laptop had been accidentally left outside and sprayed by an automated sprinkler system. “He got to the bottom of it where it was proved to be BS. That’s the kind of frolic and detour that the facts sent him on,” Sherman said. “He’s a digital bloodhound.” Garrie laughed when asked how he received the special master designation that seemed to make him a part of so many high profile proceedings. “What goes into the process? I have no idea,” Garrie said, noting simply he tried to amass as much expertise on thorny issues as possible during a career that has included stints working for the U.S. Department of Justice and Westpac Banking Corp. of Australia. He still travels extensively from his Los Angeles base and has offices in New York.

Garrie talked passionately and at length about his interest in emerging technologies, such as blockchain and so-called “smart-contracts” he claims will be commonly used by large corporations and law firms in the near future. “A large number are using the blockchain today and are entering into or utilizing smart contracts or similar vehicles to facilitate payments and other things, and disputes are going to arise. The need to arbitrate and resolve those disputes are only going to increase,” Garrie said. Michael W. Feenberg, an attorney with Nemecek & Cole, said Garrie has worked as a forensic expert and mediator in cases he litigated and also given lectures and instruction to the firm on cyber security issues and e-discovery. “He is the preeminent expert” on those matters Feenberg said. “As law firms have become an ever-growing target of cyberattacks, he brought that issue to the forefront with many law firms across the country. He’s the one to consult with how best to protect your law firm.” With respect to litigation, Feenberg said in issues of e-discovery disputes, “He is the number one person I would ever use if there’s a dispute regarding authenticity of a document.” Feenberg has also utilized Garrie as a mediator through JAMS. “I’ve found him to serve as an excellent facilitator in protocols on how litigants can obtain electronic information while at the same time protecting private information,” Feenberg said, adding he found his mediation work “incredibly effective.” Although his technical knowledge runs deep, Garrie said many times his mediations come down to managing human relationships. “Sometimes it’s, ones and zeros don’t lie. Other times it’s all about the people,” Garrie said. “I mediated one case where all that had to happen was somebody had to give a hug to their grandmother and they settled the case.” In instances of two large corporations haggling over who gets how much, Garrie noted his primary function was to listen to the lawyers and try to pitch a deal that would work for both sides. Employment disputes, on the other hand, often involved him understanding the individual issues an employee might be struggling with. “You’re nice and you listen and sometimes you give them a dose of reality,” Garrie said. “In data breach cases it’s, ‘This is what really happened.’ And I often have to call their technical experts so they can explain to them what actually occurred.” Garrie laid out the details of a data breach dispute he was mediating where an insurance carrier was denying coverage based on a requirement that any resultant damage from a hack had to last for at least 12 hours to be covered. The reported outages were only lasting around two hours, a feature Carrie explained to the parties was designed to sow confusion in targets of similar attacks he had seen deployed before. “Once the carrier and their lawyers understood what the information represented,” he said, “we were able to much more quickly and efficiently reach a resolution that was amenable to all parties.”